Over the last 15 years I have been an avid user and “developer” (actually more of a facilitator) of open source software. Having used all manner of open source software to run production systems (mainly applications running on Linux), I have participated in development communities that made open source tools to manage both free and proprietary technologies and beyond that have written extensively, evangelized and distributed millions of copies of that software. 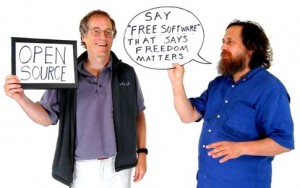 The thing that had held my fascination during that time was the countless hours highly-skilled developers and others donated to producing software that was freely available for download and modification. I also marvel at the impact of these groups to deploy and develop applications with little, if any, financial incentive and more often than not a great sense of pride in producing high-quality applications.

2010 marked the 25th year of the Free Software Foundation, founded by Richard Stallman to promote the universal freedom to create, distribute and modify computer software. In that time the use of free software has become pervasive. I thought it might be interesting to take a look at some open source software usage statistics today. It’s truly amazing the size of the open source software community and the levels of participation in them.

So finally the name of this blog, the Fountainhead, is a reference to Ayn Rand’s novel that asserts ego is what drives human progress and that the moral ideal is an end unto itself, not the pursuit of wealth.  A fountainhead is also an abundant source; in the case of this column I hope it to be an abundant source of open source information. This holds a bit of personal irony as for the last 10 years I have been working on projects that rely heavily on open source success to make money that, depending on the day, overshadows my desire to produce “free” software.